The most widely used Correlation Co efficient is Pearson r. it is also called as linear or product moment correlation.

Simple Linear Correlation: the Pearson Correlation assumes that both the variables get to be measured at the least interval scales and it also determines the extent to which both the values are proportionate to each other. The value if the correlation has no dependency on the specific measurement units that are used. To explain better, the correlation between the height and weight would continue to remain the same whether the measuring unit is inches and pounds or centimetres and kilograms. Proportional means linearly related, the correlation is high and it can be summarized by a straight line. 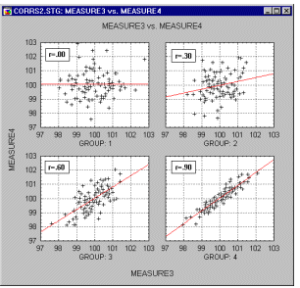 The line depicted in the above diagram is called the regression line or also sometimes the least squares line. The name is so because it helps to determine that the sum of the square distances of all data points from the line is the lowest possible. It is important to learn how to interpret the values of the correlation. It is already known that the correlation coefficient determines the relationship that is  there between the two variables.